How can you navigate a children's party with your principles intact? 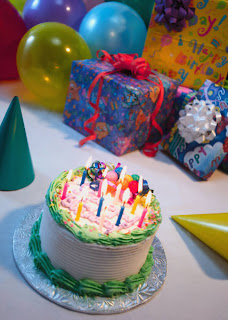 Party games at children's parties have become something of a pet hate of mine.  Parties have become a battle ground anyway.  A battle of mums to provide the very best; in location, entertainment, music, party bags, games and cake.

Growing up in the 80s parties were much less fraught with 'keeping up the Jones'.  They were very traditional affairs.  The expectation was limited to a game of pass the parcel, a single balloon with a piece of cake in a party bag, and a dance around to music in your mates lounge.

With a heaving trade in parties at a variety of locations you find yourself trooping off to bowling alleys, ski villages, soft play centres and steam railway centres.  That's to name just a selection of party venues I've taken one or the other of my girls to over the last couple of years.

But where ever you are there usually comes a point where there will be a party game.

When was it, and who was it, that decided that all the children who lost the party game would get treats?  Who decided this?  Since when did we celebrate those that lost more than the one that won?  Along with the usual "it's not the winning, it's the taking part that counts" speech, we are teaching our children to not care about winning?


With the Olympics coming to the UK I'm not sure this is the right message we should be giving.

Soft play centres are the worst offenders in my experience.  A game of pass the parcel deteriorates, as the children that take a layer off the parcel early in the game all receive a sweet, wrapped in the layer of paper they've pulled off.  Those children become uninterested in the game and disappear off to play.  There's no excitement about who is going to get to open the last layer.  It's such a shame.  My abiding memory of the game, the excitement as the parcel approached, and knowing it was nearly the last layer, but not being 100% certain.  Now, since everyone gets a prize, and often all of equal size, it really doesn't matter if you get the last layer, or indeed any layer, as even those that don't get to unwrap usually get to pick a sweet out of a box afterwards.

We've had a few parties at home for our girls and initially we caved to the pressure and wrapped mini presents within the layers, enough for all children, with a slightly bigger one in the final layer.

It was our daughter's 6th birthday this week. What did we choose to do to celebrate?  We went to the cinema with 9 of her friends.  At £1 a ticket, with a little extra for popcorn snack boxes and a party bag each with a little stationary set, balloon and party cake, it didn't break the bank and there was no need for games.  That's one way to side step the issue!  Maybe the rebellion starts next time?!

Hi there! Thank you for stopping by and leaving a comment.